Mudgee’s wineries offers wine enthusiasts a wide range of different wine styles and tasting experiences to enjoy – but did you know that Mudgee’s wine industry is over 160 years old? 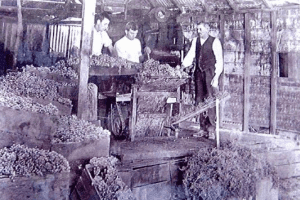 While early European settlers in the Mudgee region planted grapes and made their own wine for personal consumption, the industry began in 1858 with the arrival of Adam Roth, who planted a number of different varieties including Muscat Hamburg, Shiraz, Frontignac, White Sherry and Verdelho.  His vineyard, which he named Rothview, was located in Eurunderee, adjacent to the Bunnamagoo vineyards.  Very shortly thereafter, Frederick Buchholtz Snr. planted his vineyard, which he called Fredericksburgh, in Eurunderee on the banks of Pipeclay Creek.  He and his son, Frederick Jnr., went on to produce fairly sizeable volumes for the time, 500 to 2400 gallons per year and won several prizes in Australian and international competitions.

The fledgling industry was helped along tremendously by numerous gold strikes in the areas around Mudgee. Thousands of thirsty miners flocked to the area, traveling from one strike to another as new discoveries were made and they created a ready market for local wines.

By 1881 there were a total of 13 wineries in the Mudgee area.  The end of the gold rushes, coupled with a period of severe drought in the 1880s spelled doom for almost all of them and only two were to survive by the 1890s. One of them, now known as Craigmoor, survives to this day and includes the site of Adam Roth’s pioneering Rothview Vineyard.